Chef Barbara Lynch – does she love to cook or cook to love?

“Amuse Bouche: A Chef’s Tale” explores the controversial, comical and inspirational layers of nationally recognized chef, Barbara Lynch of No. 9 Park on Beacon Hill, Boston. Narrated by Boston food aficionado and music host Ron Della Chiesa, this intimate documentary — named after the chef’s complimentary appetizer – uses vivid events from Lynch’s life story. A female, real-life “Good Will Hunting”, Lynch overcame poverty, depression, violence and social stigma to rise through the ranks and establish herself in a male dominated business with a 60% failure rate. Although the film’s message is one of optimism, Lynch’s story recognizes how the confining definitions of traditional femininity have created internal barriers to achievement for many young women. Using a compilation of family photographs, exclusive interviews, archival and animated footage, “Amuse Bouche” demonstrates how women and men can gain confidence in their abilities, mobilize themselves, and utilize self-assertion to achieve their dreams. Appreciating the uniqueness and vulnerability of each human being, Lynch now devotes a percentage of her time giving back to the community that supported her along the way. 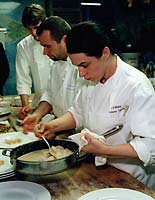 The film features footage of some of the top names in Boston’s culinary world, such as Lydia Shire of Biba and Locke Ober, Todd English and Jodie Adams of Rialto and blu – included in exclusive footage of Julia Child’s “last supper” in Boston – as well as politicos ranging from Mayor Tom Menino to Lynch’s first cousin Congressman Stephen Lynch. For the sports enthusiasts there’s even footage of running legend Bill Rodgers serving food along Lynch at a fundraising race in South Boston.

The music also includes an eclectic mix, including: original compositions and performances by Berklee College of Music alumni; Celtic singer/songwriter/wild harmonica Dennis Brennan; the Ecuadorian band Yarina; jazz pianist Richard Lucius; and an assortment of Worcester musicians who jammed in the studio for a few selections.