Three inner city teens and three retirees join forces in a year long escapade in the great outdoors, often within five miles of their homes. A mix of joyful exploration, conservationist attitudes and volunteer labor play out before the camera, with little intervention or direction from the filmmaker.

Throughout the four seasons of "green" activities, this diverse group maintains one central focus: inspiring those of us who've lost touch with nature, to temporarily separate from our electronics and get back to the outdoors. Merging resources from two Audubon settings (Boston Nature Center & Habitat in Belmont, MA), they develop a joint project that fosters a sense of belonging, strengthens relationships between individuals and communities, and builds bridges across the generations. They re-unite other urban residents with an array of outdoor opportunities in one's own neighborhood. They share the belief that when people spend quality time outside, it can make a lasting, positive impact in their lives and the future of our natural heritage. The fundamental basis of nature is cooperation and these six exemplify this understanding.  They demonstrate that by performing simple acts of stewardship and conservation in the natural settings right outside our own backdoors, we can significantly contribute to the continuing health of our planet.

Everyone involved with this production set out to leave the smallest possible carbon footprint.  With scenes composed in high def (reused cards, no tapes), the film was shot within 25 miles of the filmmaker's home. Production and post production crew often car pooled or collaborated in cyberspace. Raw, bustling street corner audio and sounds found in nature are augmented by musical contributions from the legendary Doug Bell and the Bellevue Cadillac along with Berklee College of Music alum. The film is realized through live action and intimate interviews in the fields, woods, parks and parking lots around greater Boston, MA. 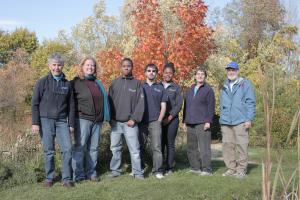